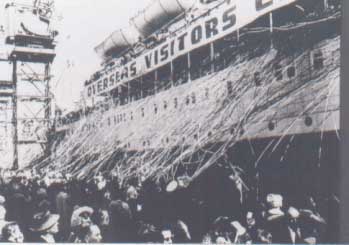 The OVC name is legendary in SA..... formed in the 1950-60's by the late MAX WILSON & Partners, who offered the 1st cut-rate travel deals with chartered flights and passenger liners to meet demand for tickets to Britain.

Flights took as long as 3 days and a sea travel ticket sold for 35 pounds with a free week's stay at the OVC hostel in London and a show ticket!

The 1960's saw OVC reach a peak. London was on the crest of a wave, with the swinging sixties hosting Rock 'n Roll , the Twist and the Beatles ruling the charts year after year.


While many an Aussie, Kiwi and Canadian settled in the UK, the political situation changed the SA's chances of becoming a "Rooinek" and the OVC sadly had to close its doors in 1973 when SA was expelled from the Commonwealth - ending a wonderful and exciting era of travel for South Africans.....